A Blog about Real Estate, How it Can Be Damaged, and Disputes Over its Transfer

This blog is a personal blog written to discuss legal issues affecting Georgia property, and how it is damaged, transferred, and fought over. I write this partly to keep abreast of the law, and partly to offer a forum for my writing. In order to find content, I often analyze Georgia Supreme Court decisions. I try to update this blog as I can, but writing is a time consuming process.

Homeowners sometimes unintentionally run afoul of stream buffer and other environmental laws when they perform landscaping in their back yards.  While minor landscaping activities are generally exempt from soil and erosion control laws, this exemption may be lost where the landscaping will take place within a stream buffer corridor.  Also, there is no certain definition of what constitutes minor landscaping.

Stream buffers are found where a drainage course or ditch contains flowing water.  Unfortunately for land owners seeking to improve their property, a stream is not always easy to define.  Generally a stream starts where the flow of water is forceful enough to "wrest" vegetation from the sides of the drainage.   This definition leaves it to interpretation whether an intermittent flow in a drainage constitutes a stream.

Once a stream exists, the laws and local codes engraft a stream  buffer along the course of the drainage.  A stream buffer is an area that must remain undisturbed for a distance outside the center of the channel.  State law defaults to a minimum twenty five foot (25') stream buffer extending beyond each side of the stream center.   Local ordinances can increase this buffer up to distances of seventy five feet (75')  thereby effectively taking a one hundred fifty foot (150') swath of land out of the area that a land owner can disturb.  Dekalb County has a seventy five foot (75') stream buffer.

Many people are angered and surprised by these regulations with little understanding of them.   However, the policies in favor of the laws and ordinances are well thought out, and have been in effect for many years.    Basically, the demands for water quality in urban areas require care for the small tributaries that feed rivers --  even from where they start as small capillaries.  To meet industry and citizens' demands for water, people have to take care of the streams. 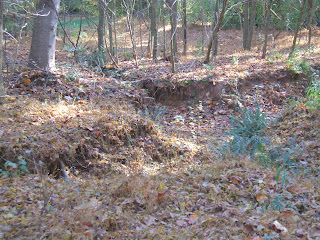 Most counties and municipalities do not contain a definitive map of "state waters" in their jurisdictions although such maps are developing.  The first place a homeowner should look is on his survey that he should have had performed before he bought his property.  Surveyors, however, do not make the decisions on what constitutes state waters either.  They get their information from the final plats of subdivisions and engineered site plans.  So even if a survey does not show a ditch as state waters, the careful homeowner should look at a final plat of the subdivision before grading around an area of a drainage that seems to contain flowing water for extended periods.   A final plat can be found in the local planning department for most counties and cities.  Alternatively, the final plat can be found in the local real estate plat index.   Older subdivisions will likely not show "state waters" though even on their plats and surveys.

The issue is not academic either.  Once a home owner violates stream buffers, legally he is required to perform stream bank restoration or obtain a variance.   If a homeowner builds a bridge over a back yard stream without getting a variance, he may end up misrepresenting his property to a potential buyer if he tries to sell it.  The form contracts written and used by the Georgia Association of Realtors (GAR) contain disclosure statements with items that a homeowner can easily misrepresent by checking the wrong box on the form.

Problems can also arise if a homeowner tries to regrade his or her driveway or another area of property.  For example, the steep topography of some lots in the Atlanta area may require regrading of a slope under a driveway.  If the driveway crosses a stream, the regrading of the banks of the slope may trigger a requirement for a Land Disturbance Permit.

Once a violation occurs, the penalties are enormous.  A violation of the Georgia Soil and Erosion Control Act LDP provisions can trigger per diem fines of more than one thousand dollars ($1,000) a day.  By the time a land owner has his day in court on the issue of whether the drainage constitutes "state waters," he could have amassed a million dollar fine.   The attorneys at Teague & Zeliff, LLC once defended a case involving more than seven hundred (700) separate per diem arrest citations with accumulated fines of more than $2 million.  Fortunately, the homeowner won at trial.
Posted by Stuart Teague at 4:17 AM

Flow from a Detention Pond Outlet

DISCLAIMER AND USE OF BLOG

The opinions and analysis stated herein are personal, and I am not expressing any advice whatsoever on any case in which I represent clients. Any factual similarity to actual cases, persons, or clients that a reader may think exists is coincidental. Also, regardless whether you are my client, a prospective client, or just a person browsing the internet looking for information, DO NOT take anything stated herein as my expression of the truth of a fact, or as an expression of advice or recommendations about a legal issue. I do not advise people through the internet and require a sit down, face to face meeting with eye contact and the proper financial retainer or contract before you become my client. If you rely on anything said in this blog to order your legal affairs, you are violating the intent of this blog. Also, bear in mind when reading the content that I am not undertaking any duty to you and have not verified or extensively researched the materials due to time constraints. Seek the advice of an attorney if you have a legal problem. Last, I welcome the opportunity to help, and feel free to comment or send me an email if you want to follow up on any of the discussions in this blog.