A Blog about Real Estate, How it Can Be Damaged, and Disputes Over its Transfer

This blog is a personal blog written to discuss legal issues affecting Georgia property, and how it is damaged, transferred, and fought over. I write this partly to keep abreast of the law, and partly to offer a forum for my writing. In order to find content, I often analyze Georgia Supreme Court decisions. I try to update this blog as I can, but writing is a time consuming process.

Recently, the City of Sandy Springs proceeded to adopt the "International" Maintenance Code to force property owners.  While the code is written as a general maintenance code, it was apparently drafted in a broad fashion to enable the City to require home owners to fix deteriorating, public storm water pipes and detention ponds located on property owners' tracts -- at their own expense.
For example, if a homeowner has the misfortune of having a public storm water pipe or detention pond on her property, the City may try to use the ordinance to require the owner to replace the public service under the penalty of a fine.  The potential fine for a property owner who cannot fix the public structure is $1,000 per each day that the repair is needed.   If the owner allowed the condition to exist for a year following notice of problem from the division of code enforcement, the alleged fine the homeowner would have to pay would be $365,000.

Property owners in low lying areas of the City of Sandy Springs near streams and along drainages are very concerned with the adoption of this ordinance.  The costs of needed improvements to the City's storm water system have been estimated in the billions although precise means for estimation are impossible.

What this ordinance means is that property owners that bought property with pipes and detention facilities on them without recorded drainage or maintenance easements have suddenly gained a new financial responsibility to the government.

The ordinance on its face was drafted solely to promote municipal and county government powers at the expense of individuals.  It contains many provisions that are questionable, including parts that prohibit property owners from holding government responsible for its own incompetence.   Also, the financial burden on property owners could run afoul of constitutional provisions that prohibit the government from taxing a few people to pay for everyone else's benefit.   In lay terms, the forced expenditures to fix a public system are being disproportionately visited on a few people while the people that enjoy the benefits of the system up hill will be free-riders on their down stream neighbors.

While the title of the ordinance claims it is an "International" code, it is basically the opposite -- it is a local code drafted by local governments that have mismanaged their finances and can no longer serve basic local needs.

A professor at a prominent urban planning school in Atlanta that I once had the pleasure of collaborating with on cases had a favorite phrase in describing reactionary ordinances adopted by local governments that could not figure out how to make the land market work in their favor:  "They suffer from the law of unintended consequences."  One "unintended consequence" of the City's adoption of this Code may be the complete destruction of the City's storm water system.   By forcing the burden of maintaining the public system on homeowners, the City is requiring those persons that are the most vulnerable to unbudgeted financial costs to pay for them.   Not many middle class homeowners can afford to write a $50,000 check to pay to replace a storm water headwall on their property.   Nor can they afford to pay a lawyer $100,000 to fight the City. 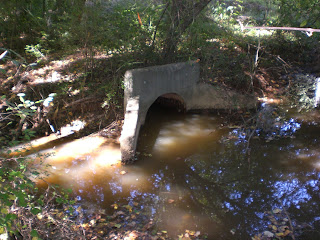 Costs to replace parts of a storm water system can be immense.  This problem is amplified by the plain fact that the rampant issuance of building permits and land disturbance permits has vastly overburdened pipes and detention ponds down stream.  Accordingly, a retro-fit of an existing pipe system or structure can require up grades to meet a larger volume of storm water flows through a drainage system caused by the government's own issuance of permits for more buildings and hard surfaces up stream.  These costs can easily run over $100,000 even without extensive engineering.  Where state waters (i.e., streams) are involved, a property owner may have to hire engineers to apply for variances from the EPD simply to obtain permission to fix the system at issue.

Ironically, many governments permitted these urban expansions to increase their tax base to pay for government services, but now that the taxes have been assessed on the new development, the governments have chosen not to use those taxes to pay for the expansion of need caused by the permitting.
Posted by Stuart Teague at 3:36 AM

Flow from a Detention Pond Outlet

DISCLAIMER AND USE OF BLOG

The opinions and analysis stated herein are personal, and I am not expressing any advice whatsoever on any case in which I represent clients. Any factual similarity to actual cases, persons, or clients that a reader may think exists is coincidental. Also, regardless whether you are my client, a prospective client, or just a person browsing the internet looking for information, DO NOT take anything stated herein as my expression of the truth of a fact, or as an expression of advice or recommendations about a legal issue. I do not advise people through the internet and require a sit down, face to face meeting with eye contact and the proper financial retainer or contract before you become my client. If you rely on anything said in this blog to order your legal affairs, you are violating the intent of this blog. Also, bear in mind when reading the content that I am not undertaking any duty to you and have not verified or extensively researched the materials due to time constraints. Seek the advice of an attorney if you have a legal problem. Last, I welcome the opportunity to help, and feel free to comment or send me an email if you want to follow up on any of the discussions in this blog.